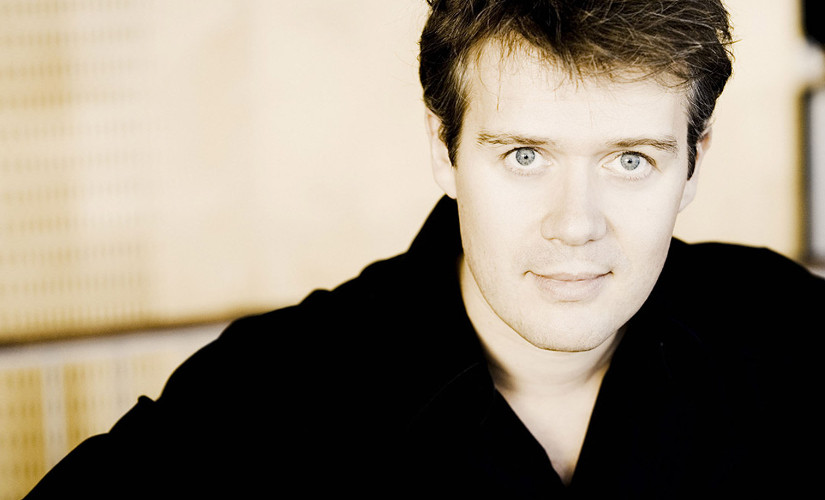 Michel van der Aa â the ‘pin-up boy’ of the Dutch National Opera or a true composer’s composer? Michel speaks honestly with budding young composer Anthony Dunstan about his career and dispels any notion of grandeur with his hard-working down-to-earth approach to the making of his richly multi-media operas.Â He speaks aboutÂ composition, his life as an opera-maker in the 21st century, his collaboration with Barbara Hannigan and how the use of film in opera can create a dream-like mood.

I was first exposed to opera as a boy of about 8. My parents had their own opera company in the village where I grew up. Each year they’d put on an opera, or operetta actually, where my father would conduct, my mother would make costumes and administrate, and I would sing. It was there I saw the magic of theatre where just a simple wall would suddenly become a majestic mountain. During this time I was learning classical guitar and found it quite natural to play around and compose on it. I would write songs and perform for my parents. Through my teens I played in many bands where we’d write our own songs. The composing continued while I studied sound engineering in The Hague and started my own recording business. This wasn’t enough for me, so I then focused on composing more seriously.

I started experimenting with the visual side of music when I wrote Wake for percussion duet where one player plays, and the other simply mimes. The interest in writing for opera became more apparent and I decided that is what I wanted to do. I was already friends with Barbara [Hannigan] through the Royal Conservatoire in The Hague and we decided we wanted to do an opera together. We had worked together previously (Here Trilogy) so it was also something we had been naturally working towards. I took a year off to study film direction and develop my interest in image further. We toured One through 13 countries and the piece was an important step in my early career.

In the construction of One, I followed my intuition which in itself was not a conscious choice. I had images of a woman breaking branches â this was the first idea I had â just an image. From there it all unfolded quite organically. I knew I wanted to construct a libretto without a clear narrative arch â not dissimilar to a dream or nightmare – and so I began writing the film material and composing music with these initial thoughts in mind. The rehearsals themselves were also platforms for composing and brainstorming ideas on the spot. For this reason it’s a relatively simple score using only voice and electronics. Admittedly, the vocal part was eventually very challenging, but this only became apparent after the piece was complete. During the process I was really just creating a montage of ideas and seeing how they worked. So although I wrote, directed and composed everything, within the process there was a lot of freedom to try things out and continue adjusting sections even in the late stages of production. It was a frightening process to be honest. Up until then I had been composing scores. This was the first time I had approached a piece in such an organic manner, so at the premiere I sat in my chair thinking ‘I really have no idea how this is going to be.’

I find myself gravitating toward themes of the human condition rather than social or political themes, which allows me to explore a space of transience. Through the process of making One, I discovered I was interested in psychological or dreamlike narratives that push the audience in a certain direction without giving everything away. In works such as One, After Life, and Blank Out I wanted to create a balance between the abstract and the concrete. I did this by fragmenting the story, like a mystery, and gradually piecing it together. Film also plays a part in creating a dreamlike mood. I am able to create new dimensions of a character’s personality or representing alter-egos through film. The film aspect is not just a tool for deepening the dramatic experience but also a part of my vocabulary. It allows me to say things other mediums can’t. We’re surrounded by technology and media in our day-to-day lives. It is the DNA of our time. It’s not the reason I choose to use film or electronics, but it would seem artificial to me not to use these obvious influences in my work. As an affect, it seems to make opera more relevant and accessible.

Combining mediums, particularly ones as complex as film and electronics, is a very stressful endeavour. This is compounded when your imagination grows and you want to accomplish more complicated setups. Each time, you’re discovering something new and each project has different challenges. One was our first and we discovered how film and live images could fit together. In After Life there was a conveyer belt and images and music and staging, all needing to line up together. Then Sunken Garden was the first 3D film I did which meant there were many elements we needed to fit to scale so that live images corresponded with the filmed images. And finally Blank Out required new software to be written for us as it didn’t yet exist.

With the majority of my music theatre works, I find myself taking on the three major roles of production â librettist, composer, film director (and editor). Oddly, this prevents me from losing myself in each of these roles. I like to allow myself to dream about a piece, but once the job of writing a budget arises, reality sets in, and I become responsible for consolidating the idea into a feasible concise concept that can be realised. It was during One and again with Blank Out that I needed the aptitude for axing material that didn’t fit or wasn’t needed. Due to the fact it’s a stressful thing you bring upon yourself as a maker, I surround myself with a Dramaturge, Set Designer, and Scenographer who mirror my ideas. I do this because I am aware of the risk that the work won’t get the early criticism it needs to stand up in the public arena. So although it’s my conception, I need these people to ask me the hard questions about the specifics of the work.

People may find it difficult to categorise my operatic works because they cross several media and art forms. There aren’t many references they can draw from within the field I seem to be operating in. But to me that’s an indication of an honest expression of what inspires me, which apparently is a lot of different things. I’m in a very fortunate position to be given the liberty to explore these inspirations whether it be literature or film or visual arts or technology or music or the stage. I have the freedom to be moved. For me, opera is what you think it should be. It’s very important to let yourself form a concept for a piece in the early stages before presenting it to opera houses whom have their own agenda. This can discourage some young makers to attempt more adventurous ideas. There’s nothing that says operas need to be presented in the traditional venue. There are many smaller, more intimate venues, theatre houses, and festivals that offer a platform for new and exciting music theatre works â itâs a partnership waiting to be forged.